I know this ain’t the Total Divas blog, but straight up and down, you Internet Wrestling muthaf***az have got NO BARZ for me. You know why? Now your newest favourite sweetheart – Paige has joined the cast for the second half of Season 3. Yeah keep hating. If I see Paige walking round on the show in her panties, DON’T TALK TO ME. You fat @$$£$ been trashing the show, now your girl Paige is on it… along with Alicia Fox. Don’t F**kin talk to me. I’ve been down with the show from the start… you wanna jump on the bandwagon now? F**K YOU. GA-LANG, and support your favourite batty bwoy Dolph Ziggler.

(Ga-Lang is Jamaican Patois for ‘Go Away’)

OH SNAP!!! That Hell In A Cell… it’s coming down… and Triple Teef ain’t afraid of that thing! He’s been in it, beaten the best, but failed to beat the TRUE MASTER of the cell: The Undertaker!

WORD? Street fight between Randall, Seth & Glenn Vs Cena & Ambrose? Yo this might as well be the main event for the PPV, you know that cell is coming down!

Your hear that IWC??? It’s a DOUBLE main event…that’s exactly what Triple said… so whichever goes last – it’s a main event so simply put – SHUT THE F**K UP!

Check this out… the winner of the Cena Vs Orton Hell in a Cell faces BRRROCK, LESSNAR!!! Ok I’m throwing it out there… no Get In The Chair awards necessary… Randall gonna win. Randall faces Brock, WINS… or even if he loses, he will make sure Brock gets that beating, then… Seth cashes his cheque, becomes the champion heading into Big BIG WrestleMania against the Royal Rumble winner…. I just can’t see Brock defending the title at Mania as if he did we would know that he’d lose…. considering his contract… I’m just doing the science… but I shall validate it AFTER the Hell In A Cell PPV.

Justin Roberts fired last week… Who gives a monkey’s @$$? Certainly not me! We got Lillian Garcia!!! You IWC b!tches crying over Justin Roberts… who gave a f**k about him before he was fired? NO ONE. So don’t act like you care… NO YOU DON’T MUTHAF***A! Kill that noise with that fake sh!t! WWE Upgraded if you ask me!!!

Actually you see that early WrestleMania prediction I made? SCRATCH THAT… It wasn’t thought through properly….

Uh-Oh!!!! Well at least some of it WAS thought through! Triple reveals that the Randall/Cena stipulation was Seth’s idea… UH-OH! Watch your back guys!!! He’s out to cash that cheque!

GODAMNIT can’t we get a stipulation between AJ Lee & Paige for the divas title? Goddamnit these girls have gone at

WOW!!!! The crowd chanting AJ???? This is live, right? Not pre-recorded??? Finally Kansas City has understood…

OH hell naw!!! This is a serious situation Cena! This is supposed to end your decade rivalry and you’re running jokes? Even The Rock had to go serious against his nemesis Triple H…. FIX UP CENA!

There you go! He got serious! And both want to fight the beast…. ARE THEY SURE??? I didn’t know Paul Heyman was here??? HAHA! I like how Heyman is cutting this promo, talking that Cena & Orton ain’t sh!t against BRRRROCCCK LESSNAR… but looks up at the cell… as if he had visions of himself getting buss arse by a certain B!ATCH!!!!

All that talking sh!t by Heyman…. Cena is such a fool – ready to drop the AA on Heyman and didn’t…. CENA YOU SOFT MUTHAF***A!

PS3/XBox360 massive and crew! ARE YOU READY?

OH SNAP!!! Rusev has gone too far! The russian flag was supposed to come down! Big Show switched it up! Old Glory came down instead! Rusev is furious! Come on Lana… tell me to SHUT-TUP you sexy muthaf***a! NO! Rusev was gonna pull down the flag!!! How the rarse did a troop find himself in the ring?! But he got kicked down! Rusev kick down an US troop!!! (hey – good bump!)

Big Show is BEXXXXXX!!!! Forget the PPV – let’s do this right now Rusev! If your name bad man… go out and test the Big Show! Now you made him angry…. Oh boy oh boy…. If Show finds you – your goose cook!

I can’t believe Dean Ambrose is just chilling in his room with popcorn watching Kane’s film See No Evil 2!!!! He can’t do that – he’s gotta big match coming!

Go on Brie Bella – beat down that Summer Rae lady! How is she gonna take off with Rosa’s man like that? It’s not often I

What the rarse has Dean Ambrose got in those bags of his? Don’t tell me it’s weapons he intends to use on Seth Rollins… if it is…. UH-OHHHHHH!!!!

He gotta screwdriver in there! And DE HAMMER??? A chainsaw??? A Power Drill? Entertaining us on how he’s gonna f**k him up in the cell!

You know why you’re not sweating the cell Rollins? Because your opponent is not THE DON OF DONS HIMSELF!

WTF??? MICK MUTHAF***!N FOLEY???!!! No one clocked on to this!!!! BACKSIDE!!! All those dirt sheets talking about Foley not down with the WWE these days! F**KOUTTAHERE! 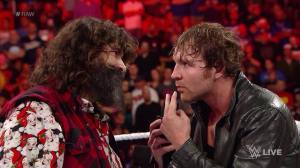 He’s just saying hello to a ‘old friend’… The Cell itself! he’s basically saying to these guys – this Cell will F**K YOU UP!

For the first time, I think Rollins actually showed signs of worry after Foley’s motivational speech! This Cell ain’t no joke rude boy!

Big ups to Jay-Bee for acknowledging the dude – Ox Baker who died recently…. Live on Live Long….right IWC B!tches – you got no bars now!

YES! Ziggler lose again! Cesaro caught him with the SHO-RYU-KEN!!!! got the 3, and hit the Neutralizer – BLAOW!!! Everytime Ziggler gets f**ked up, it brings joy to my heart!

WOW!!! I wasn’t feeling this ‘Hell In A Cell by the numbers….’ but my god they went IN on that statistics video! I gotta commend WWE for building this up despite the lukewarm card they have put together,… and why have I got this feeling that the Wyatt mans are gonna appear at the PPV? Their disturbing, Lionsgate like promos are f**ked up as they come!

CENA & AMBROSE! GLENN, SETH AND RANDALL!!! THIS IS A STREET FIGHT! HERE WE GO!!!

Why is Cena waiting on the apron for a tag? Kill that noise! It’s a Street Fight – NO RULES! Get in there Cena and KILL!!!

Very good Cena you use the 5 moves of doom… now you draw for the steel chair! and the tables!

Oh dear! Cena & Ambrose not doing too well! Glenn is killin em! Now the cell is coming down! It’s worries for them now! It’s all out Ruckus up in this b!tch! This is as good as an Armageddon Hell In A Cell!!!

So hang on… Ambrose’s Dirty Deeds super move is now a double arm DDT? BACKFOOT! Shades of Mick Foley himself!

The Authority win! but switch – Seth Rollins with the curb stomp to Randall – BLAOW!!! You see? The ‘face turn’ of Orton is a slow one…

Ok now I gotta get behind the cameras, behind the airwaves and discuss this in detail with my STC brethren!!!

IT DON’T GET NO BETTER! STC 4 LIFE…..BEEEEEEEATCHHHHH!

DISCLAIMER: ALL OPINIONS EXPRESSED BY THE INFAMOUS INFORMER DO NOT NECESSARILY REPRESENT OR REFLECT THE VIEWS OF THE WWE, THE SMACK TALK CENTRE OR BDSIR NETWORK.